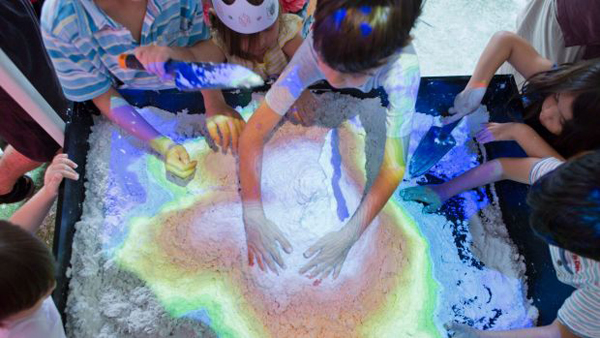 World Science Festival has rolled into the weekend, with lots of hands-on experiments to try out at the Cultural Forecourt in South Bank. Photo: Supplied.

Brisbane Times and University of Queensland have paired up to bring you the most diverse and comprehensive coverage of the World Science Festival Brisbane 2017.

Day four of the World Science Festival was by far the busiest day of the five-day event, as thousands of people flocked to spend their Saturday at South Bank to enjoy fun and interactive science.

Bright and early this morning, Dr Karl, one of Australia’s favourite science personas, talked to festival-goers about everything to do with health, and answered some of science’s most pressing questions: night vision via carrots, weight loss, and the satanic properties of Doritos.

What happens when black holes collide? Gravitational waves appear. Brian Greene led a discussion covering the phenomenon, which produces more energy than all the stars in the observable universe. If you can’t fathom how much energy that is, it’s a whole lot.

The Street Science! event welcomed families who strolled through the various tents huddled around the Cultural Forecourt. There was everything from dog-like robots to live science experiments, and a whole lot more family-fun science in-between.

Be sure to tune in Sunday morning as we cover the final day of this whirlwind event!

Ethics and Practicalities of Space Exploration

Worm holes, spaghetti, time travel – these were just some of the topics explored at today’s Earth 2.0 event as physicists, astronomers, geologists and an astronaut discussed the practicalities of exploring worlds beyond our own.

“The challenge is that when you go through a worm hole you become a piece of spaghetti, that is you end up simultaneously being the entire length of the worm hole,” he said.

“I doubt wormholes exist and if they do I’m pretty sure I don’t want to go through one,” he said.

As well as practicalities, NASA astronaut Dr Andrew Thomas questioned whether humans really had the right to visit and change the landscape of other planets.

“If the planet has any activity do we have the right to go and disturb that, isn’t terra-forming an act of vandalism?” he said.