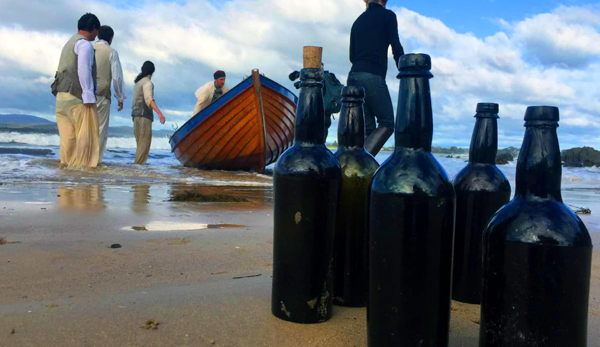 An international team of scientists have brewed a beer using live yeast collected from a sunken vessel off the coast of Tasmania.

A 220-year-old beer bottle was salvaged from merchant vessel, Sydney Cove, which was travelling from Calcutta to Port Jackson when it sank in 1797 near Preservation Island, Tasmania.

The research team isolated live yeast from the bottle and used it to brew beer using period recipes.

According to the team, the beer has a distinctly light and fresh flavour, giving a taste of beer that has not been sipped for 220 years.

“The yeast is an unusual three-way hybrid with links to bakers, brewers and wine yeast,” said Thurrowgood.

“It is genetically different to hundreds of yeast species it has been compared to from Australia and around the world. Traditionally beer was brewed in open vats. This yeast is consistent with historic brewing practices.”

The Sydney Cove shipwreck is the eighth oldest shipwreck in Australian waters. Underwater archaeological excavations of the site were conducted by Mike Nash, Tasmanian Parks and Wildlife Service, during 1991-1994 with funding from the national Historic Shipwrecks Program.

“Possibly the wreck has now also given us the world’s only known pre-industrial revolution brewing yeast,” said Thurrowgood.

Queen Victoria Museum and Art Gallery director, Richard Mulvaney, said the museum plans to continue the research into the yeasts and bacteria recovered from the bottles, if they are successful in obtaining funding.

“We will also study the wine and spirits from the cargo, possibly enabling recreating other historic brews,” said Mulvaney.

“The bottles also enable study of historic red wine molecules to see if they are different to modern red wine and its reported health benefits, and to study other possible dietary micro-organisms from 220 years ago.”

The journey of salvaging the beer bottles from the 220-year-old Tasmanian ship wreck, through to reviving the extinct brewer’s yeast and recreating the beer was documented in The Oldest Beer a story, which aired on ABC TV’s Catalyst program.