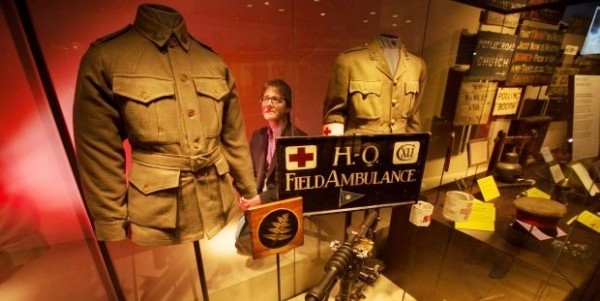 The great, hulking gun on wheels standing guard at Melbourne Museum is hard to miss. Not only does it dominate the exhibition’s entrance, the 13-pounder Royal Horse Artillery Gun is the very one which fired the first British shell on the Western Front.

A centrepiece of the WWI Centenary Exhibition, which opens on Friday, the gun stands as a reminder of how the Great War was like nothing that had gone before it. This was the beginning of the era of mechanical warfare.

“When you have quick-firing artillery, you are extremely vulnerable,” said Imperial War Museum’s director of public programs Samantha Heywood. “Troops were running towards something which can mow them down extremely quickly.”

It didn’t take long for the military minds on both sides to realise that different tactics and equipment were required.

“They had to dig in,” said Imperial War Museum’s principal historian Nigel Steel. “Armies literally had to go underground.”

The first trenches of World War I appeared near the Aisne River in north-eastern France in September 1914 – essentially ground zero for the Western Front.

The changing face of warfare is reflected in the artifacts of the exhibition, which features original timber trench “street signs” and weaponry including knives, bayonets and daggers. Some were made in factories. Others like the wooden club with nails protruding from the tip, were fashioned in the trenches.