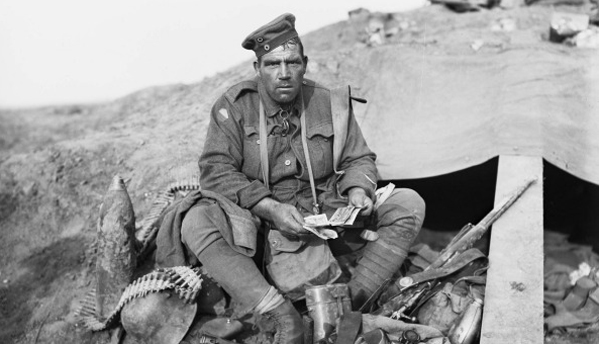 Private John “Barney” Hines, A Company, 45th Battalion, with his trophies (souvenirs) obtained on the morning of the advance of the 4th and 13th Brigades at Polygon Wood. Australian War Memorial.

Commemorating the battles of World War I is not just spending money on “dead people and stones” but about the sacrifices of modern military service, according to Major-General David Chalmers.

Speaking after the ceremony to mark the centenary of the 1917 Battle of Polygon Wood Major-General Chalmers – who headed the Australian recovery taskforce in Aceh Indonesia – pointed out the amount spent on commemorations represented only a tiny portion of the Department of Veteran Affairs’ annual expenditure of $12 billion, of which mostly goes to veteran pensions.

“What’s interesting is these events are not only about honouring the dead,” Major-General Chalmers told The Australian Financial Review. “We know from Vietnam veterans who come back and feel their service wasn’t valued that it has a very corrosive effect on their health and mental health. The idea of commemoration is to help educate the public and to raise their awareness of service and sacrifice.”

“In that sense, we are not just spending this money on dead people and stones. We’re spending it on the mental health of veterans.”

More than 1000 dignitaries and military officials from Australia, New Zealand, Canada, Ireland, France, Belgium and Germany came to pay their respects at a chilly dawn service to mark the centenary of the Battle of Polygon Wood.

Mourners gathered on the damp ground between the sombre rows of white headstones at Buttes New British Cemetery in Zonnebeke near Ypres. Of the 2000 plus graves, 564 are Australian and 162 New Zealand.

“World War II is the beginning of the nuclear age, which creates immediate and catastrophic threats to whole populations, not just to armies that meet each other on the battlefields,” he said.

“There is a new dimension to security risks – it is pervasive, and it is destabilising.”

“If anything, we draw lessons from [the nuclear age] of World War II that make people cautious and hopefully return to reasonable behaviours,” he told The Australian Financial Review after the two-hour dawn service.

“There is a new dimension to security risks – it is pervasive, and it is destabilising.”

When asked about the growing nuclear threat between the North Korean regime led by Kim Jong-un and United States President Donald Trump, Sir Peter said: “It’s being managed as well as might be by our government and they will be governed by what’s best for Australia.

“I always refrain from adding commentary on contemporary issues. The commentary ought to remain with people charged with leadership on both sides of the political spectrum…I’ll always hope and pray that Australia will remain safe.”

The service for the Battle of Polygon Wood, in which more than 5770 Australians died, is one of the last World War I centenary events organised by the Australian Government under its $300 million programme of remembrance that began in Gallipoli on Anzac Day 2015.

On October 31 an event will be held to mark the centenary of the Australian Light Horse Charge at Beersheba; followed by major commemorations for Villers-Bretonneux on Anzac Day 2018 and the Battle of Hamel in July 2018.