Thousands of Australians will be robbed of the chance to participate in the commemoration of Australia’s history because of funding cuts that have halted the War Memorial’s travelling exhibitions, a leading union says.

The Community and Public Sector Union said the funding cut was a short-sighted decision.

Memorial director Brendan Nelson said late on Monday the shock funding cut had forced him to cancel the travelling exhibitions.

The exhibitions, including one to commemorate the centenary of World War I, were part of the memorial’s program to take exhibits to people around Australia who could not travel to Canberra.

CPSU deputy secretary Beth Vincent-Pietsch called on the government to make up the shortfall.

“It’s a sad state of affairs when the National War Memorial has to cut such a loved and important program as this in a centenary year,” she said on Tuesday.

“This cut is going to rob thousands of Australians around the country of the opportunity to participate in what is a really important commemoration of our history.

“It’s a short-sighted and entirely unnecessary decision and we would call upon the government to step in and make up the shortfall.

“This decision shows the very real impact that this government’s cuts to public sector funding are having across the board.

“There’s a chain reaction – Veterans Affairs has its budget cut by almost half a billion over four years so it’s having to pass that on to the National Memorial. In the end it’s the community that loses out.”

The exhibitions being dropped include Remember Me: The Lost Diggers of Vignacourt, Ben Quilty: After Afghanistan, Nurses: From Zululand to Afghanistan, A Camera on Gallipoli and Reality in Flames.

“After 17 years of its co-sponsorship, the Department of Veterans’ Affairs informed the memorial last week that it has found it necessary to cease funding the travelling exhibition program effective immediately. There is no plan for it to be reinstated in the foreseeable future,” a statement from the memorial said on Monday.

The sudden decision comes as the memorial is revamping its World War I galleries and gearing up for commemorations for the centenary of WWI.

Dr Nelson said the successful travelling exhibitions program was established about 17 years ago, with exhibitions being displayed in museums and galleries across Australia.

“In delivering travelling exhibitions to the Australian public, particularly in regional and rural areas, the memorial has told the story of Australia’s military history with support of the memorial’s extensive national collection,” he said.

Current travelling exhibitions will return to the memorial once they conclude at their present venues. 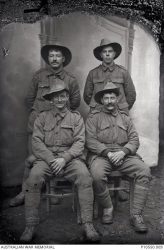 Image from 'The Lost Diggers of Vignacourt' travelling exhibition. Source: Australian War Memorial
Positions Vacant » View All
» Kaituhi Maori / Maori writer – Te Papa
» Interpretive Planner – AWMM
Latest News » View All
Powerhouse’s 5 new exhibitions
Eucalyptusdom to Electric Keys Read more.
10 new art museums
Opening globally in 2022 Read more.
“Activating Smithsonian Open Access”
- new models for interacting with collns Read more.
Outback Museum of Australia, Charleville
$8.34M through in Building Better Regions Read more.
British museums face long Covid’s effects
visitation halves from pre-pandemic levels Read more.
Top +
Council of Australasian Museum Directors, c/o Ms Daryl Karp, Museum of Australian Democracy at Old Parliament House PO Box 3934 Manuka, Australian Capital Territory 2603 Australia, © CAMD 2021
Copyright: All information and resources provided on this website remain the copyright of the Council of Australasian Museum Directors. Permission is granted for viewing and downloading for personal and not for profit purposes. Those wishing to reproduce any materials for commercial, educational or other uses are requested to contact us.
Disclaimer: The content of this website is provided for information purposes only and is not intended as a substitute for professional advice. No claim is made as to the accuracy or authenticity of the content of the website. The Council of Australasian Museum Directors does not accept any liability to any person for the information or advice (or the use of such information or advice) which is provided on this website. The information on our website is provided on the basis that all persons accessing the site undertake responsibility for assessing the relevance and accuracy of its content. No responsibility is taken for any information or services which may appear on any linked web sites. Hostgator.
.