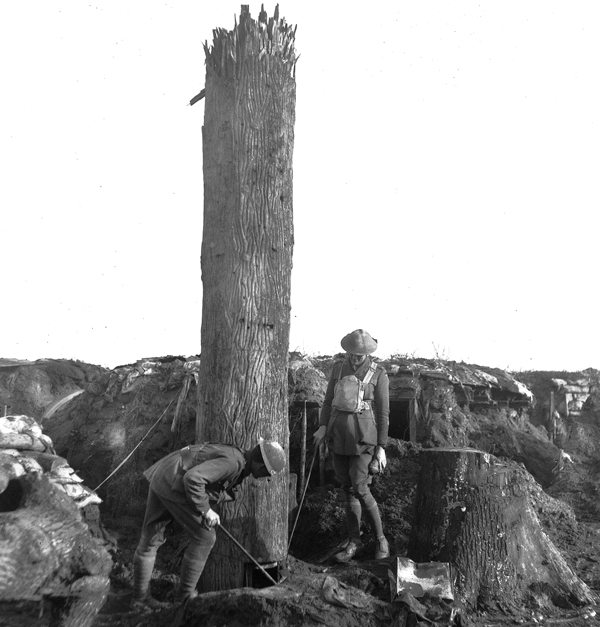 Two unidentified Australian officers examining a tree trunk which was used as an observation post at German House. The opening to the post is located at the base of the trunk. The color patches indicate the officers are members of the 3rd Division Army Services Corps. Note behind the post a dugout (center, right) and trenches. (Courtesy of the Australian War Memorial).

Jennifer Billock, These Fake Trees Were Used as Spy Posts on the Front Lines of World War I, Smithsonian, 24 February 2017

On the Western Front, meticulously crafted iron trees were used by both sides to conceal enemy forces

As a result of World War I, we now count among our military innovations the likes of tanks, flamethrowers, tracer bullets…and fake trees. Amid the war, they were called observation trees and were tucked into the woods along the front lines—faux wooden housing for soldiers to ascend and gain an otherwise unseen advantage.

The French, the British, and the Germans used these trees throughout Great War. The French were the first to use one, in 1915, and they then tutored the British on the approach—which was adopted by the Germans soon thereafter. Creating the trees was a lengthy and detailed process since, with such close proximity to the front lines, everything needed to be carried out in secret.

First, engineers would find a dead tree near the front that had (ideally) been blasted by a bomb. They would then take extensive photos, measurements, and sketches of the dead tree. From there, work commenced behind the scenes. All of the detailed information would be brought back to a workshop, where artists would create an exact replica of the tree: life-size, with the same dead and broken limbs, and with expertly crafted “bark” made from wrinkled, painted iron. To make the bark appear more real, the artists would often cover it with a rough textured concoction made from materials like pulverized seashells.

The most important part of the tree, though, was the interior. Each replica tree was hollow, with fake bark surrounding an inner armored tube that would protect whichever soldier was inside. Soldiers would climb a narrow rope ladder through the middle of the tree and sit on a metal seat (in many cases, with a wooden cushion) at the top. Sections of the outer bark were cut away and replaced with metal mesh to disguise viewing holes for the soldier. For protection, though, the soldier faced a solid metal wall and had to use a periscope or telescope to see outside the tree. They would then communicate what they could see to the troops below, who would handle the situation from the ground.

After construction came the real challenge. Since the front lines were very visible, the fake tree had to be installed at night, under the noisy distraction of gunfire. The engineers would come in, tear out the original tree, dig a hole in place of its roots, then install the fake tree. When everyone woke up in the morning, the tree would still be there and still looked the same—except now it was a hollow, armored vessel concealing a soldier at the top.

As part of the 2014 to 2018 centenary of World War I, visitors to the Australian War Memorial in Canberra, Australia, can see one of these trees on display. The tree featured in this memorial was actually used in battle by German forces from the 3rd Division Army Services Corps. It was used as an observation post camouflage tree, or Baumbeobachter, which translates to “tree observer,” and it stood in Oosttaverne Wood in Belgium. A number of soldiers and 3rd Division members had signed the tree, either in pencil or by scratching their initials into the metal itself. One of the soldiers who signed the tree, Private Frederick Augustus Peck, was killed in battle just three months after he inscribed his name on the bark.