You are here: Home » Articles filed under: 'News' » Article: 'Yidaki: Didjeridu & the Sound of Australia'

Yidaki: Didjeridu & the Sound of Australia 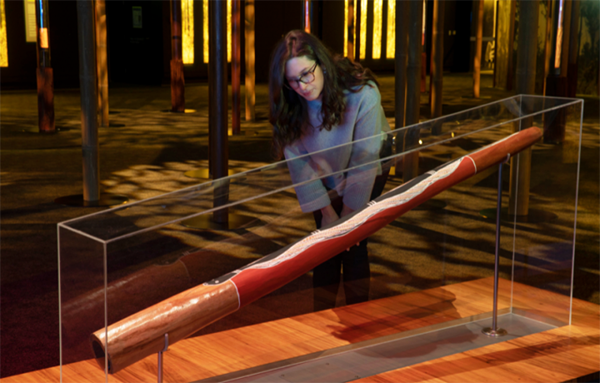 Produced by the South Australian Museum in partnership with the National Museum of Australia (NMA), visitors will be immersed in the history, sound and stories of the yidaki (didjeridu) as they step into an unusual sensory experience that breaks the conventions of a normal exhibition.

Yidaki: Didjeridu and the Sound of Australia was developed in collaboration with the cultural custodians, the Yolngu people of north-east Arnhem Land under the guidance of Djalu Gurruwiwi, a universally recognised authority on the musical and spiritual traditions of the didjeridu.

Professor Margo Neale, head of the Centre for Indigenous Knowledges, Senior Indigenous Curator & Principal Advisor to the Director at the NMA, has her own strong connection to the instrument—while teaching in Arnhem Land in the 70s, her classes would end with her students flipping over their chairs to play the hollow legs like didjeridus.

“The didjeridu is very much integrated into Aboriginal life in those communities….traditionally it was not through the rest of Australia but it now is because we have a dynamic culture,” she says.

“Everyones familiar with the ideas of the didjeridu but very little is known about it so this exhibition is one positive step.”

Opening up the box of history, the Yidaki exhibition brings the past to life as it connects people with the role of the didjeridu as social instruments, instruments of spiritual life and of healing as well as its significance as a symbol of Australia.

“In the old days if you said a ‘didjeridu show’ you would have a whole heap of objects in a room,” says Professor Neale.

“What you see in this exhibition is actually about hearing and immersing yourself in the sounds.”

Using voice, song and story, Djalu Gurruwiwi acts as a guide for the exhibition, helping visitors explore 20 key objects that are displayed in a stringybark forest, designed to enhance the sound.

Musical platforms called thunderboards are also featured in the exhibition so visitors can feel the vibrations of the yidaki in their body as they watch them being played. 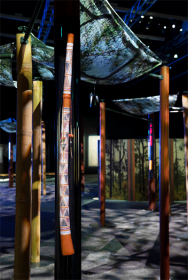 Launched in time for NAIDOC Week, Yidaki: Didjeridu and the Sound of Australia has a strong connection to this year’s theme: Heal Country.

“Everyone is the legacy of all the stories of the continent, the creation stories, so if you want to call yourself Australia you need to know your story,” says Professor Neale. “Indigenous Australians are willing to share these stories with you,  which are in effect sharing your stories.”

“We are saying ‘These are your stories too now and you need to know them to take responsibility to help preserve the cultural life of Australia’.”

According to Professor Neale, by taking didjeridu out of traditional ‘regulated spaces’ and bringing it to the center of contemporary musical life, it acknowledges the sophistication of Aboriginal culture, history and languages.

“The didjeridu was only viewed as a primitive musical instrument that just belonged to Aboriginal people….but now things are changing.” 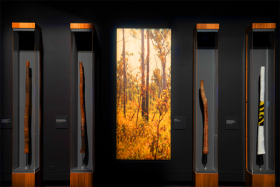 What: Yidaki: Didjeridu and the Sound of Australia
When: Until 26 September 2021
Where: Temporary Gallery at the National Museum of Australia
Website: nma.gov.au/exhibitions/yidaki-didjeridu