You are here: Home » Articles filed under: 'News' » Article: 'Zealandia – the new continent' 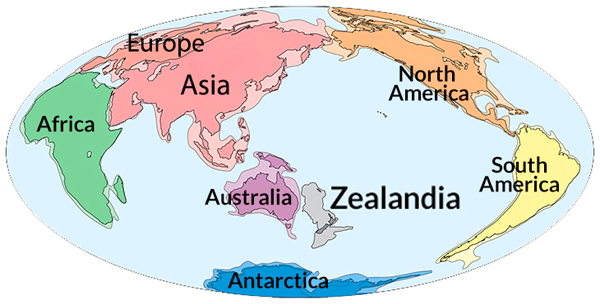 Dr Hamish Campbell, Te Papa’s geologist in residence from GNS Science, talks about the news that intrigued the world in February 2017 – that it can legitimately be claimed that Zealandia is a distinct continent.

Did you hear? There is a new continent on planet Earth.

Crazy stuff! How could there be in this day and age?! It simply doesn’t make sense. The last continent to be discovered was Antarctica, surely, in the 1820s.

This news story gripped the media globally in early February this year (2017). And it’s thought the story reached around one billion people.

It all began in Australia when the news media picked up on a scholarly scientific article in GSA Today, a high-profile American journal published by the Geological Society of America. To the astonishment of most Australians, a ‘new’ continent, named Zealandia, had been recognised just off their east coast!

In a way it was old news in New Zealand because it was first named in the scientific literature in 1995 by American scientist Bruce Luyendyk, a professor of geology at the University of California in Santa Barbara. At the time, he was involved in research in Antarctica and needed a useful name for an extensive tract of the Earth’s crust that related to the New Zealand region. Needless to say, he named it after New Zealand.

Since 1995, ‘Zealandia’ has become a fixture in our geological nomenclature. It struck a chord with New Zealand geologists and indeed the wider public. So much so that Te Papa embraced the concept and ran with it in an upgrade of the Awesome Forces exhibition in 2004, and the old Karori Wildlife Reserve in Wellington changed its name to ‘Zealandia’ to better reflect the ancient Zealandian heritage of New Zealand’s native plants and animals.

What is a continent?

The main reason for a late 20th century recognition of a ‘new’ continent has to do with how continents are defined. As luck would have it, there is no scientific definition. All that exists is the meaning offered in the English Oxford Dictionary.

The most significant aspect of this definition is that it does not require a continent to be land. It is all to do with the nature of the crust: it must be continental crust. Whether it is above or below sea-level is not deemed relevant.

What is continental crust?

In the 1960s, scientists involved in exploration of the ocean floors established that the Earth’s crust beneath the oceans is fundamentally different from that of the major land areas. Two types of crust were recognised: oceanic crust and continental crust.

These are the most common rock-types on Earth and they are both igneous, that is, they start off as hot liquids. When they cool, they crystallise and form rock. Curiously, granite is less dense (2.5-2.7 gm/cc) than basalt (2.8-3.0 gm/cc) and in a sense floats with respect to basalt.

And the reason why we did not figure this out until the 1960s is that oceanic crust, representing 71% of the Earth’s crustal surface, is buried by seawater and hidden from sight.