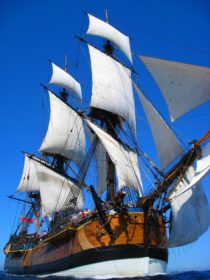 A legal manoeuvre, known as ‘arresting’ the shipwrecks, could secure ownership with Rhode Island if the wreck is indeed found at the bottom of Newport Harbour.

If the ship legendary explorer Captain James Cook used to sail around the world and claim Australia for the British is found at the bottom of Newport Harbour, Rhode Island will own it outright because of a legal manoeuvre it took nearly two decades ago based on an obscure, centuries-old maritime practice.

In 1999, Rhode Island went to federal court in Providence to do what’s known as “arresting” the shipwrecks in the harbour – having the government take possession of them so a federal court could consider the state’s ownership claim.

The court agreed, and ultimately declared the state the owner.

Cook used the Endeavour to claim Australia during his historic 1768-71 voyage. Researchers now believe the Endeavour was part of a fleet of 13 ships scuttled by the British during the Revolutionary War in 1778 to blockade Newport Harbour from the French.

The Rhode Island Marine Archaeology Project, which is leading the search effort, said in early May it was closing in on Cook’s ship. It has narrowed its search to a group of five sunken wrecks, and already has mapped four of the five sites in that group.

Arresting the ship years ago was a smart move.