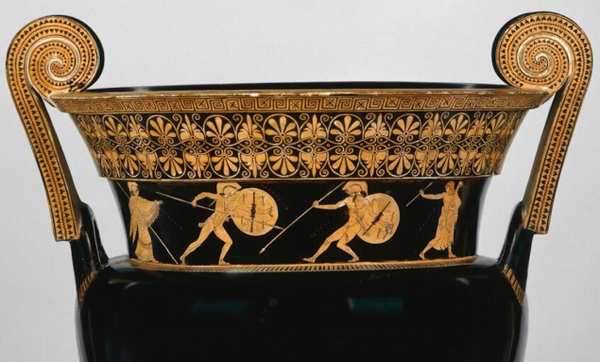 An exhibition at the Princeton University Art Museum showcases the vessels of the so-called Berlin Painter, highlighting the oft-overlooked comedy in Greek ceramics.

PRINCETON, NJ — Too many Greek vase jokes are lost in translation. For example, this duel between Achilles and Hector looks serious. But tragicomic ironies abound in ancient epic. The Trojan war started over a woman — Helen of Troy — and before this particular duel, Achilles chased a frightened Hector around the city three times before he would finally face him. That’s not exactly courageous, is it? The Princeton University Art Museum’s show The Berlin Painter and His World: Athenian Vase-Painting in the Early Fifth Century BC is not only the most important vase painting show in years, it’s also an opportunity to laugh with the ancients.

The Berlin Painter is a pseudonym. A scholar coined it after a masterpiece in a Berlin museum, whose style is strikingly similar to numerous other pieces. It became evident that the same artist or workshop made them all. Detractors gripe we’re encumbering ancient potters with a fictitious name and the modern baggage of artistic genius. But it’s robotic to rattle off anonymous Greek painters numbers 1 through 17, so let Berlin have this.

At Princeton, the exhibition’s introductory wall text doesn’t let on to the humor. “The Berlin Painter and His World is a celebration of ancient Greece and of the ideals of reason, proportion, and human dignity that are its legacy.” This doesn’t exactly live up to its own ideal of reason. It was never the goal of the Berlin Painter to leave a legacy to edify and dignify a future he never fathomed. Nor did he create his objects for museums to enlighten visitors. He made them for ancient symposia, which were far more debaucherous and playful than modern ones.

Two prevalent institutions of Archaic Athens played a significant role in the imagery of vase-painting: the symposium and pederasty. Held in the andron, or men’s dining room, the symposium was an all-male entertainment that took place in the evening and consisted of drinking wine, conversing, playing music, singing, dancing, competing in drinking games (e.g. kottabos), and reveling on the way home (komos). Reclining on couches (klinai), the drinkers were served by young boys and entertained by flute girls and courtesans and/or prostitutes (hetairai). Because the majority of Attic vase shapes were used in the symposium… their imagery often illustrates these activities. For example, one work in the show features an image of Herakles reclining and drinking, which can help us to envision the original, imbibing viewers of these ceramic vessels.

Two recent books from Cambridge University Press take up the enduring humor of Greek ceramics, examining how comic imagery on vases and pots punctuated this debauchery. Alexandre Mitchell’s Greek Vase Painting and the Origins of Visual Humor and David Walsh’s Distorted Ideals in Greek Vase Paintings: the World of Mythological Burlesque allude to a sea change in how a new generation of scholars is approaching these artifacts. Many of the scenes depicted functioned like Saturday Night Live skits, offering comic relief to onlookers as they indulged.

For example, Zeus, not pictured, lusts after Ganymede, pictured below, in one object on view. It’s not just funny because it’s gay, it’s funny because it’s Zeus. Imagine if the leader of the gods was a sex addict and, like Bill Clinton, he always got away with it. How reassuring Zeus must have been to carousing men in symposia scheming to get away with cheating, too.