Congratulations to the Museum and Art Gallery of the Northern Territory (MAGNT) which has just won a Northern Territory Chief Minister’s Award for Excellence in the Public Sector in the ‘Enhancing Culture and Lifestyle’ category!

At an awards ceremony in Darwin, the app was recognised as an innovative and collaborative project, that continues to bring information and enjoyment to thousands of Territorians and their visitors.

The app was put together by the Territory’s leading scientists, images and sounds from the MAGNT collection as well as from external photographers and volunteers. It was developed in collaboration with Museum Victoria and an app now exists for every state and territory (see What animal was that?)

Download the app on your Apple or Android phone, and use it to identify over 600 species, from animals found in tropical rivers and reefs to the deserts of Central Australia – everything from colourful birds, iconic fish and mammals, dangerous snakes and crocs, through to butterflies, tiny termites and wasps.

MAGNT also has a new website which can be found here. 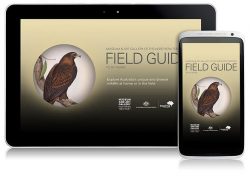 NT Field Guide. Source: Museum and Art Gallery of the Northern Territory
Positions Vacant » View All
» Head, Visitor Experience – Queensland Museum
» Archivist – MAAS
Latest News » View All
ANMM’s Asst Dir appointed BGSA’s CE
Michael Harvey to change cultural instns Read more.
London’s Garden Museum on Constance Spry
& the fashion for flowers Read more.
European Museum of Year Awards announced
Winners of both 2021 & 2020 awards revealed Read more.
MV on Kofi Kindness – The Gratitude Journal
Kofi, MV & Office of Suburban Development Read more.
MV to receive $33.5M in State Budget
to deliver a new Gondwana Garden Read more.
Top +
Council of Australasian Museum Directors, c/o Ms Daryl Karp, Museum of Australian Democracy at Old Parliament House PO Box 3934 Manuka, Australian Capital Territory 2603 Australia, © CAMD 2021
Copyright: All information and resources provided on this website remain the copyright of the Council of Australasian Museum Directors. Permission is granted for viewing and downloading for personal and not for profit purposes. Those wishing to reproduce any materials for commercial, educational or other uses are requested to contact us.
Disclaimer: The content of this website is provided for information purposes only and is not intended as a substitute for professional advice. No claim is made as to the accuracy or authenticity of the content of the website. The Council of Australasian Museum Directors does not accept any liability to any person for the information or advice (or the use of such information or advice) which is provided on this website. The information on our website is provided on the basis that all persons accessing the site undertake responsibility for assessing the relevance and accuracy of its content. No responsibility is taken for any information or services which may appear on any linked web sites. Hostgator.
.